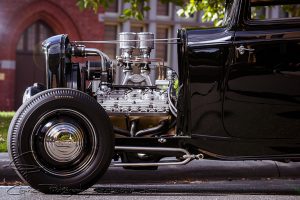 Art Deco photography and a 1932 coupe!

“I’ve always loved the 1950s life style and culture as well as that era’s hot rod theme. I’m also a  world war two buff combined with a love of all things Art Deco!. The hot rod scene fired back up again when the war was over and that’s the style of rod I like. As for the build, I had to base my design around Australia’s engineering requirements. It had to be built with an original 1932 chassis so I could get full rego.”

And that’s how this traditional 1932 Ford coupe with its own artistic flare came about styled! Jimmy Tzivakis, heralding from the city of Melbourne, Australia is the creative mind behind this cool 32 hot rod and explains the basis for the build. “I always wanted something that was built by a kid out of LA around 1957, scouring through junk yards and putting a car together. I wanted a down to earth fifties style rod. The Art Deco theme is an era I absolutely love, the style, the clothing, the buildings and that’s why I tried to incorporate as much of the Art Deco theme into the car that I could without making it look too gimmicky.”

As previously mentioned, the first item to source in order to have a road registered vehicle in his home country was an original 1932 chassis and with help from a good friend in Texas, Don Mackintosh, located the eighty year old relic in Los Angeles, the home of hot rodding.

Chassis work was handled by Ben Thomas of Rancho Deluxe in Heidelberg, Melbourne. “Ben was probably one of the best period style hot rod fabricators in Melbourne before he headed to Austin, Texas to ply his trade there. A big loss to Melbourne’s hot rod community” exclaims Jimmy. Ben boxed the chassis for structural strength while keeping with the old school theme by using Belled holes to replicate the lightened aeronautical theme we love applying to our traditional rides! In the owner’s words “it’s a work of art and a shame to have to cover it up with the body!” 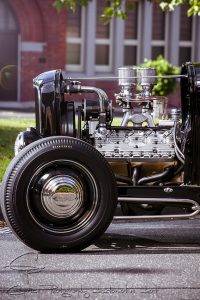 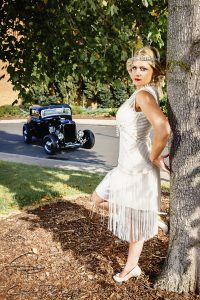 Because 32 tin is rare as hens teeth here in Australia, Jimmy spent many hours scouring the Net, thanks to sites like The H.A.M.B and Ebay searching for those elusive items that would bring his dream into fruition and one such item was an original 1932 steel firewall. “I used a steel firewall in the glass body because I like the way the leading edge remains thin and original looking. Through contacts on the H.A.M.B internet forum site, I found Vic O’Neil who was able to oblige me in all my requests including swing out windscreen and external hinges to retain the originality of the coupe when supplying me with a fibreglass shell.”

With the chassis work underway, John & Spider at Hell Bent Hot Rod Engineering set about steeling out the body along with Jimmy’s other fabrication requirements which include hiding the floor framing inside the cabin to give the underside a smooth clean finish to compliment that classic looking chassis.

As any hot rodder knows, this vocation has its ups and downs and one such downer for Jimmy was the engine build. After buying his preferred flat head V8, a 239 c.i. unit from a supposedly reputable builder in Fresno based on a recommendation, the finished product turned out to be nothing but junk! “The engine builder used second hand parts throughout the motor such as second hand bearings. There wasn’t even a push rod for the fuel pump so the motor would never have run anyway! Then when we stripped it down and stress tested the block, it leaked like a sieve” recounts Jimmy disappointedly. “I went and saw an engine builder in Bendigo called Rod Rainford at Advanced Engine Dynamics who specialises in vintage engines and he built me a new motor using my heads, crank and con rods, the only parts I could salvage off the other motor.” Also thrown into the mix are Ross Forged pistons, custom ground cam shaft while an Eddie Meyer high rise intake with twin Stromberg 97s top off the granddaddy of all V8s. Spark comes from an electronic distributer hidden under a modified Chevrolet dizzy cap with a Powermaster alternator receiving the same trick treatment inside the generator housing!

Mated to the now healthy V8 motivator is a Toyota Celica 5 speed manual gearbox giving this cool classic good take off at the lights as well as great cruising speed on the highway when on a club run or cruising to a rod show. Putting the power to the tarmac is a trusty Borg Warner differential out of a Chrysler Centura due to its narrow width suiting the coupe’s body dimensions perfectly with the traditional steelies and Coker black wall rubber! 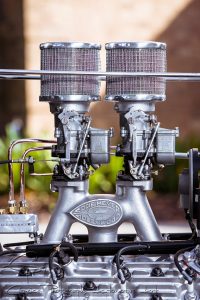 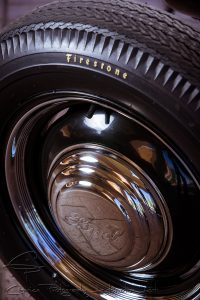 A forged model A dropped spindle axle with a 3 ½ inch chop up front held in place with hair pin rods gives the black beauty its stance while single transverse springs front and rear take out the rough ride. Stopping power comes courtesy of F100 drums up front along with stock rear drums and all executed by human power with only a master cylinder feeding fluids to all four corners. As Jimmy says “If those front brakes can pull up a two tonne Effy, they’ll have no problems stopping a light weight hot rod!” 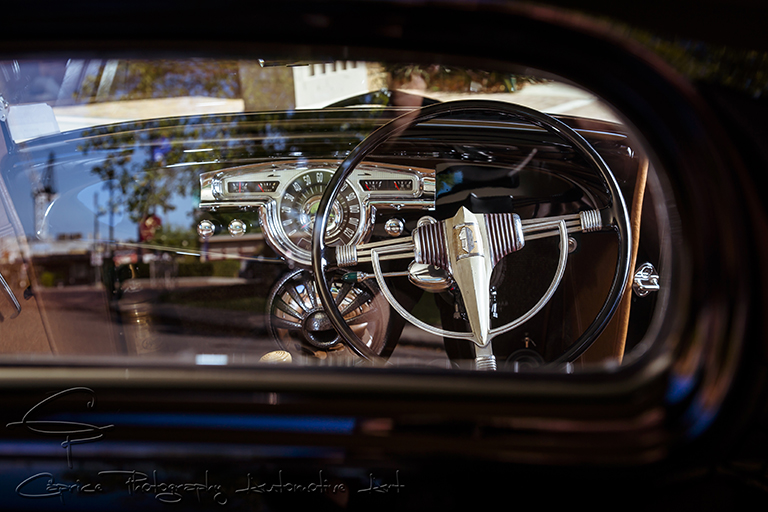 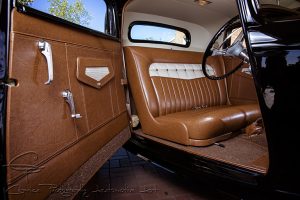 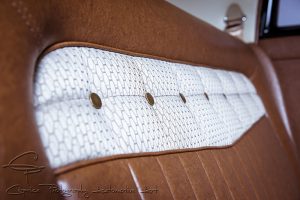 Poking your head in through the suicide doors, you’re greeted with an eclectic array of Art Deco styling that blends beautifully with the earthy tones used to cover the creature comforts. The 1955 Oldsmobile gauge cluster nestles nicely in the center of the dash complimented by the Art Deco stylings of the 1941 Pontiac tiller. It takes a good eye and a lot of creativity to bring these eye popping items together! Jimmy explains his decision making process. “I went through four or five dashes, six or seven tail light combinations and three or four steering wheels during the seven year build to get it to how I wanted it. It took five years to find all the parts. Many parts had to be modified to fit and to work with other parts. I’ve still got a collection of heaters up in the garage left over from the final decision.” And that steering wheel? “I believe that was the last of the cars that used steering wheels in that style. It was just another ratty old part that I had found and had to use a donor wheel, cut out the center and reweld it into the donor rim, bog it up and spray it. Again, all I got out of the original wheel was the center.”

The hammer toned painted heater from a 1938 Dodge looks more like a juke box and once again stands out as a visual source of art in the cabin yet manages to share space comfortably with its surroundings!  “It looks very much like a rising sun symbol representing Sun Studios in the fifties. I remember when I picked it up, it was trash and the fella I bought it off told me it had a rats nest in it and it stunk! It took some work to clean it up but now it’s back to its former glory!”

Adrian Morgan from Kool Trim is responsible for bringing it all together with his own unique style of craftsmanship which is why Jimmy chose to use him. They both shared a common line of thinking when it came to stitching styles as Jimmy explains. “The first time I met Adrian, we compared notes and both liked a trimmer over in the states called Sid Chavers on Instagram and we each came up with the same upholstery picture without knowing the other one had too.” 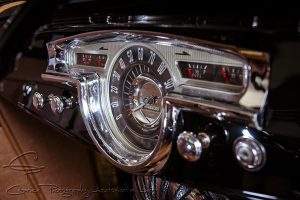 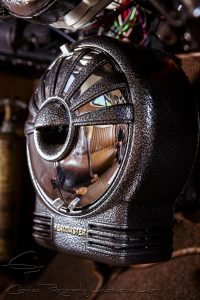 The seat frame was crafted from scratch before being covered in tuck n roll vinyl from a 1970 XY Falcon while the floor is layered with cut pile carpet from a 1950s Mercedes Benz. The insert in the seat was dug out of Adrian’s stock material and helps add to the 1940s art style. The perforated head lining is all one piece from the windscreen through to the parcel shelf, a specialty of Kool Trim! Handles and winders are 1965 Mustang items while Easy Wire wiring sends current to all corners of the coupe.

Those trick taillights are 1941 Pontiac, reshaped to fit the body and those quirky turn signals were lifted off a 1930s bus. Up front, Guide 682 headlights show Jimmy the way home to his garage after those long day events before parking her up and settling down inside, content in the knowledge he has successfully built the car of his dreams while encompassing all aspects of his interests in one sweet ride! Sweet dreams Jimmy! It’s sitting in your garage! 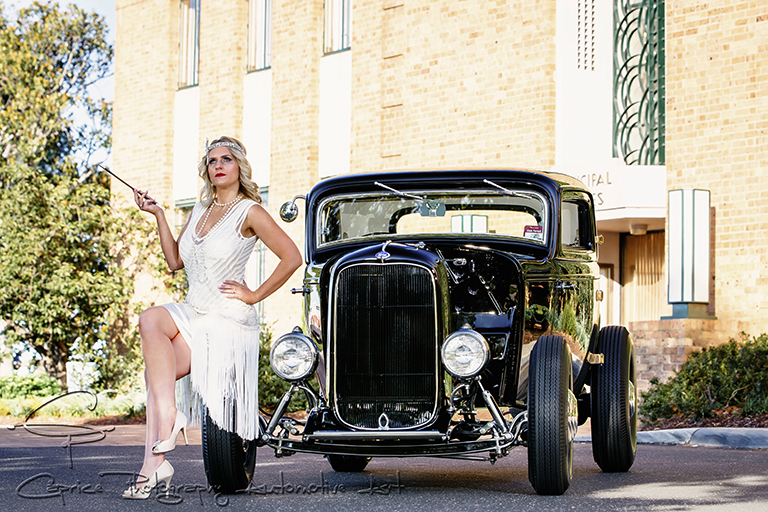 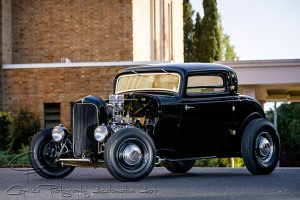 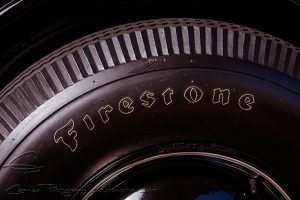 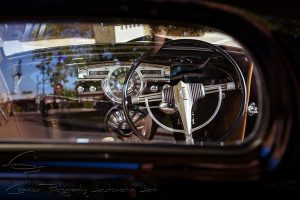 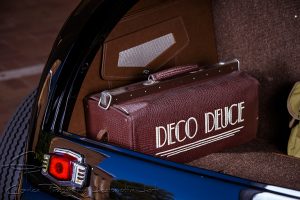 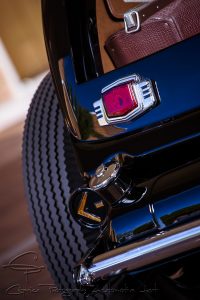 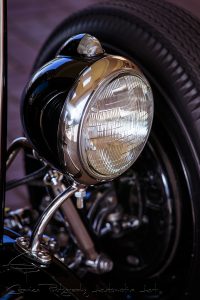 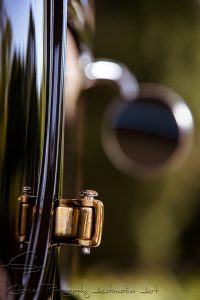 The family station wagon has always been exemplified as the people movers but now the modified car scene, and in particular, classic car aficionados are finding the long roof vehicles to be a cool car for the latest modifications! They retain the original flash trim mouldings and styling of the sixties classics but install late […] 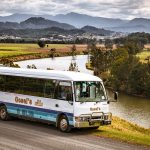 Professional photography in Murwillumbah When it comes to photographing on location, the challenge is to travel light while still having the ability to supply your client with a great array of images for their advertising and marketing purposes.

This classic 1964 EH Holden sedan retains its original guise while a late model LS1 V8 is the heart beat under the bonnet! Attention to detail has seen this fine example of a street machine rise to the top of its class thanks to the owner’s fastidious attention to detail when it comes to fitment […] 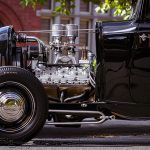 Art Deco photography and a 1932 coupe! “I’ve always loved the 1950s life style and culture as well as that era’s hot rod theme. I’m also a  world war two buff combined with a love of all things Art Deco!. The hot rod scene fired back up again when the war was over and that’s […] 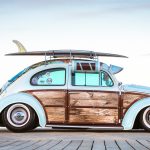